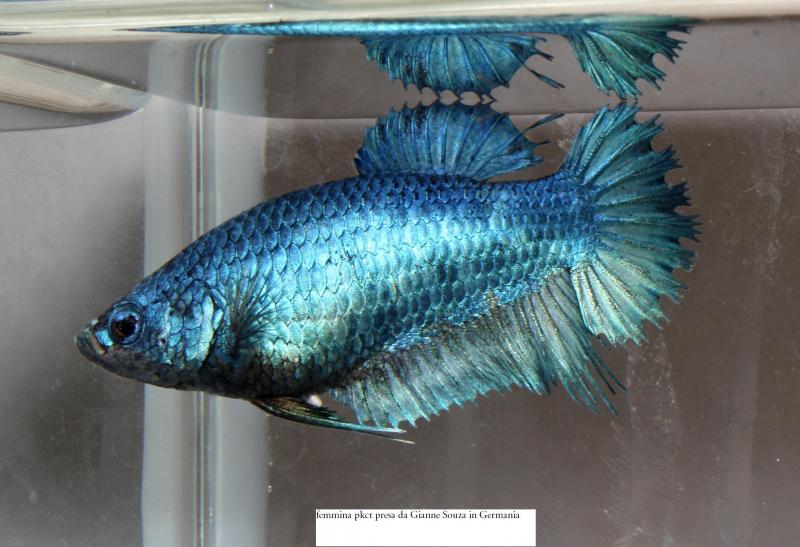 I had the idea to try developing this line in 2011, I don’t remember if I saw some similar fish or what, but I told my brother to search for a nice crown female in shops. He found the one I started with. I didn’t like very much, but he said it was the best they had in shops: a commercial CT female.
On may 2011 the 6th I had the first spawn of this female with one of my copper dragon HMPK, coming from a previous spawn with a black dragon. (Accoppiamento 060511)

I choosed the best offspring form this spawn, selecting by form and color, and I decided to go on spawning them on January the 12th 2012. (Accoppiamento 120112).

I had very few fries from this spawn but there was a male that was starting to be close to a good PKCT form. Unfortunately all the females were far from good and the following spawn (Accoppiamento 190712) gave bad result: few offspring and not quite good.

I did not take another chance with the couple because they were the only one left and I decided to give up on the project.

On September 2012, Alby brought in Cesena’s aquarium fair some nice specimens form one of his spawns, so I decided to try it again with that same male from the spawn 190712 and one of Alby’s female. Unfortunately I didn’t take a picture of this female because I was hurried to spawn them and I already had a good picture of the male. Later on the female died before I was able to take a picture. Their spawning happened on October the 3rd 2012 (Accoppiamento 031012).

In the picture, together with the my male you can see the parents of the female, thei are from Alby’s. From this spawn I took a good male, but the caudal still was not opening 180°, so on the next August I tried to spawn him with an HMPK female, still a copper coming from a black dragon line (Accoppiamento 300813).

The result is the female I sent to Friedrichshafen, which was taken in the U.S. by Gianne. From the same spawn I had a turquoise male and some other females I gave to Roberto Silverii and a pair I spawned in Accoppiamento 100114, which will keep the line going and gave a good number of offsprings with nice forms and colors. We’ll see what comes out from it.